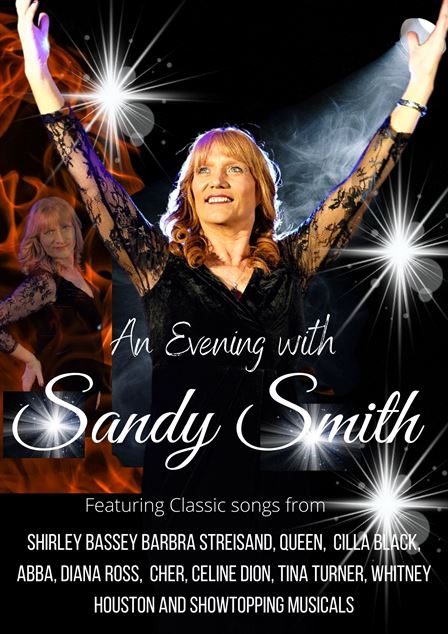 Venues and the public

Sandy Smith is becoming a well known name across the North East and the UK with her various shows including her Sell out Shows of Cilla & The Swinging 60s and Night of The Stars. She can adapt to suit any venue or style and is booked up well in advance.

A stylish celebration of music from some of the most legendary Artistes of all time. From Shirley Bassey and Tom Jones, Cilla Black and Dusty Springfield, Barbara Streisand and Elaine Paige right up to Whitney Houston, Celine Dion and many more, each track is handpicked to ‘wow’and entertain you.

Starring the unforgettable voice of former West End Singer and as seen on ITV, Sandy Smith, who some of you will have already seen in the sell-out show of Cilla & The Swinging 60s. This show will take you on a journey through the decades including many of the greatest songs ever recorded such as ‘I who Have Nothing’, ‘Evergreen’, ‘I’m Alive’, ‘Bohemian Rhapsody’ and You’re My World to name just a few!
The likes of Diana Ross and Donna Summer, Tina Turner and Cher will leave you with that feel-good vibe whilst the anthems of Abba and Queen will bring you to your feet!!
This sell-out show has something for everyone – smash hit songs, fantastic music, dancing, singing and a huge memory of some of the biggest names in the entertainment hall of fame.

Thank you for your feedback, we will look at the problem as soon as we can.